NEW DELHI: He made his India debut in 1947 and just a year later Balbir Singh Dosanjh, better known as Balbir Singh Senior, became the hero of independent India’s first major sporting success — the 1948 London Olympics men’s hockey gold. Seventy-two years from that day, one of the greatest players the game ever saw has left for his heavenly abode, aged 95.

Balbir Singh, one of the greatest centre forwards ever, has left behind a treasure trove of memories — fondly taken care of by his grandson Kabir Singh and daughter Sushbir Kaur, who he used to live with at their Chandigarh home. The duo formed two pillars who supported Balbir Singh in the strongest possible manner.

The shine of that 1948 Olympic gold won’t be the same as ever, with it’s proud owner not there anymore to wear it. But it will be a rich tribute to talk about those seventy minutes on August 12, 1948, after which India’s tricolour was hoisted at an Olympic medal ceremony for the first time.

Balbir Singh Sr: Pay your tribute to the legend

Here’s an account of that momentous day, including anecdotes by the legend himself.

India was just three days away from celebrating a very special Independence Day. Around 7,000 km away, in London, 11 Indian men were fighting a different war against their former rulers – the British. The venue was the Wembley Stadium, packed to capacity. The occasion was the Olympics final in men’s hockey. The irony was unmistakable. The British, before this, had refused to play a team from India since it was one of their colonies. On that day though, they had no choice. India was a free country, and the Indian players played like free men, thrashing Great Britain 4-0. India won their fourth consecutive Olympic gold, and the tricolour of an independent India made its maiden journey to the top of the pole at the Olympics. History was made.

Sub-inspector Balbir Singh made his Olympics debut in 1948, and by the end of the Games, he was a hero. The centre-forward scored two goals in the final, while Tarlochan Singh and Pat Jansen scored the other two.

“It happened 70 years ago, but it feels like only yesterday,” Balbir Singh had said in 2018, as he reminisced the moment while talking to Timesofindia.com.

“The Tiranga rose up slowly. With our National Anthem being played, my freedom-fighter father’s words ‘Our Flag, Our Country’ came flooding back. I finally understood what he meant. I felt I was rising off the ground alongside the fluttering Tiranga,” he added.

The legend of Balbir Singh Sr 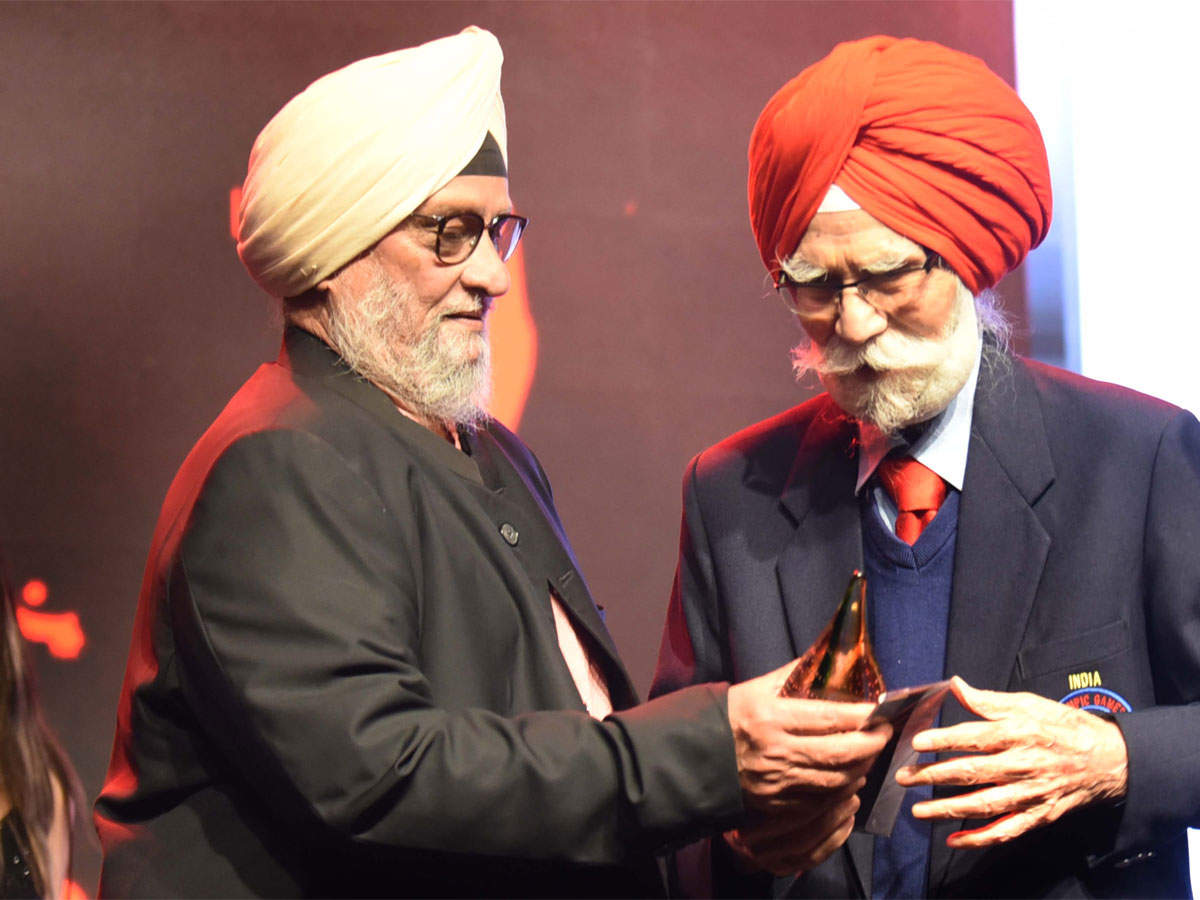 Balbir Singh went on to win two more Olympic gold medals – one in 1952 and as captain in 1956, but the top prize in the 1948 Games remained the most cherished accomplishment for him. For a man who was once handcuffed by the Britishers to be inducted into the police force and play for Punjab, it was payback. Incidentally, the same British officer who ordered that arrest, Sir John Bennett, came to welcome the Indian team when it landed in London for the Games and hugged Balbir.

India’s 1948 gold medal was hailed by the entire nation. It was a special moment for independent India.

The country had paid a heavy price for its freedom from the British Raj. India was partitioned for the creation of Pakistan. In one of the largest movements of population in history, millions lost their lives, families and friendships were ravaged and loved ones were lost or left behind as dead bodies.

After a catastrophe of that magnitude, hockey provided the country a sense of sweet revenge. Great Britain, who incidentally had beaten Pakistan in the semi-finals, had to once again kneel down in front of Indian resolve. 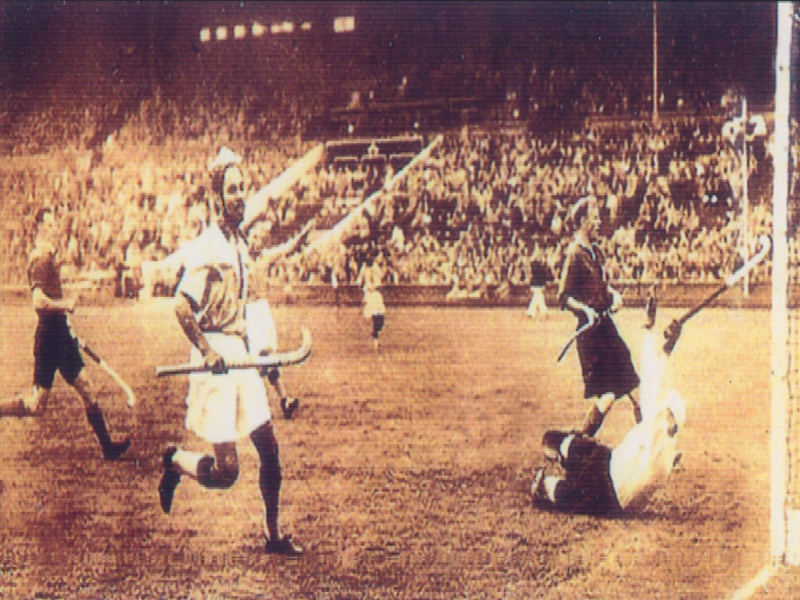 Balbir Singh Sr, in his autobiography ‘The Golden Hat-Trick – My Hockey Days’, describes the moment when the umpire blew the full-time whistle at Wembley signalling India’s win.

“After the victory, VK Krisha Menon, free India’s first High Commissioner in London, who witnessed the match, came running to congratulate us,” he wrote.

The scenes that followed upon the team’s return home were soul-stirring.

“Bombay literally rolled out its biggest red carpet. It was natural, since the maximum number of players in the team were from that city,” Balbir Singh mentioned in the book.

“We were swept off our feet and it was here that I realised what the victory meant to our nation, starved as it was of world class accomplishments. Hockey was the only sport that gave the country a ray of golden hope, something to cheer for and celebrate.

“In Delhi, President Rajendra Prasad and Prime Minister Jawaharlal Nehru came to see a match that had been arranged at the National Stadium…The press claimed that 70,000 people watched the match that day…The enthusiastic spectators hoisted us on their shoulders, patted us and touched us, as if they were paying a tribute to heroes returning home from a fierce battle.” 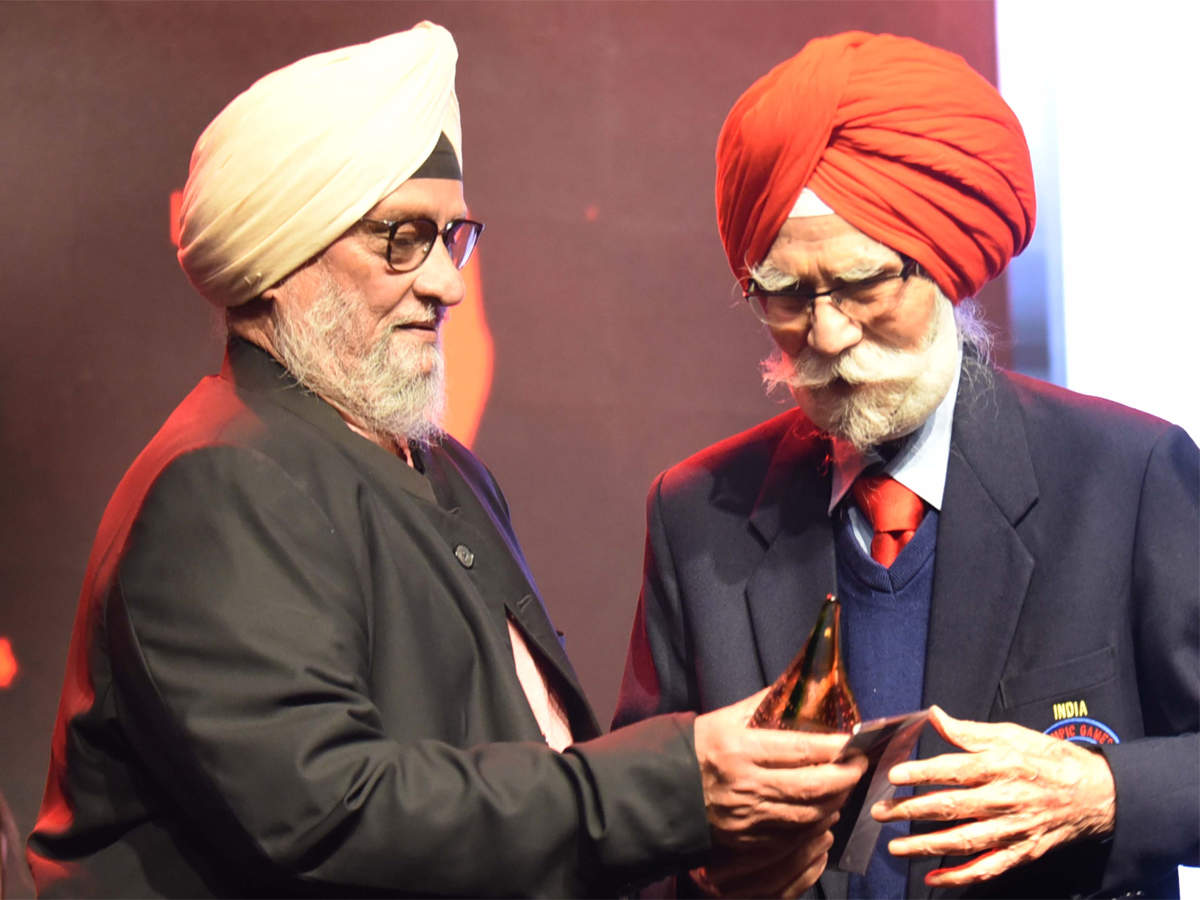 Interestingly, Balbir Singh was not selected in the 39 probables for the 1948 Olympics, only to be telegrammed later to join the national camp after the chorus of voices asking for his inclusion grew louder. Two days into the camp, he broke a rib and was hospitalised. However, he recovered soon and was named in the 20-member Olympic squad.

At the Games in London, Balbir was pulled out of the eleven at the last minute in the quarter-final against Spain and the semifinal against Holland. That despite scoring six goals in the match against Argentina on his Olympic debut. The touring selection committee seemingly had some reservations about Balbir. But after another public outcry, he was included for the final. And the rest, as they say, is history.

On August 12, 1948, India thrashed Great Britain 4-0 to win their first Olympic gold as an independent country. In this photo Balbir Singh Sr can be seen receiving congratulatory messages from VK Krishna Menon, High Commissioner for India.

In the final against Great Britain, Balbir Singh Sr scored two crucial goals. In this photo the India legend can be seen celebrating with team mates after his second goal in the final. He was in fact dropped for the quarters and semis and India struggled without him. He was brought back into the team following an uproar.

Always in the spotlight

After the heroics of the 1948 Olympics, Balbir Singh Sr. and co. became overnight stars. Along with skipper Kishan Lal, Balbir Sr was the talk of the town thanks to his performance in the finals. In this picture the whole team along with Balbir Singh can be seen meeting India’s last Governor General C. Rajagopalachari.

Even with the additional duties of captaining the side, Balbir Singh played tremendously well to help independent India bag a third straight Olympic gold in Melbourne after London (1948) and Helsinki (1952 – when he was vice captain). This was also the sixth consecutive gold medal for India overall (pre and post independence) in hockey at the Olympics. In this photo Balbir Singh Sr can be seen along with his men, receiving the medal on the podium.

After leading independent India to its third consecutive gold at the Olympics, Balbir Singh was a household name. In this picture taken in 1957, then President of India Dr. Rajendra Prasad can be seen conferring the Padma Shri to the legend of Indian hockey.

Respecting and paying tribute to other legends

In this photo taken on February 6,2009 in Chandigarh, Balbir Singh Sr can be seen posing with the stick of Indian hockey legend Major Dhyan Chand, who represented India in three Olympics (1928, 1936 and 1936 – winning gold in all three).

Balbir Singh ‘The coach and mentor’ of Indian hockey team

In March 2015, Balbir Singh Senior was conferred with the Major Dhyan Chand Lifetime Achievement Award during the Hockey India Awards. Along with the award Balbir Singh Sr also was given a cheque of Rs 30 lakh.

India in his heart – always

In 2019, Balbir Singh senior was hospitalized for 108 days. Even then he had India in his heart. In this picture, Balbir Singh Sr can be seen looking at the Indian flag, hanging from his window in his hospital room in Chandigarh.

A die hard fan of the sport and especially of the Indian hockey team, Balbir Singh Sr also followed the exploits of the Indian team regularly. This photo of his was taken during India’s FIH Pro League 2020 encounter against the Netherlands where India registered a win.

Even in his final days, Balbir Singh Sr continued to be a family man, spending time with his family including the younger lot.

Icon of the Century

In one of his rare public appearances, Balbir Singh Sr graced the occasion of the 2019 Times of India Sports Awards in New Delhi where he was honoured as the Icon of the Century. Indian cricket legend Bishan Singh Bedi presented him the award in a glittering ceremony.

Love and appreciation for the younger lot

In this photo the legendary Balbir Singh Sr can be seen sharing the frame with all the winners of Times of India Sport Awards (TOISA 2019).

The best of Balbir Singh Sr in a single frame

Balbir Singh Sr won many awards throughout his life, but his most prized possessions must have been the three golds that he won with his team in the 1948 London, 1952 Helsinki and 1956 Melbourne Olympics. This photo shows the three Olympic medals he won together in one frame.

In hindsight, the Britishers probably didn’t want to play India internationally pre-independence because they knew how big a threat India’s hockey team was. In Balbir’s words, the British snub was due to a “sense of false prestige” and “haughty British traits”.

That equation changed completely after seventy minutes of hockey on August 12, 1948, and that too on the British soil.